Sites to see on Isla Mujeres

The Zocolo - The Town Square

Like every Mexican town, the Zocolo is located at the center. Not much happens during the day but if you decide to extend your visit through the evening, you’ll often see dances, events and celebrations going on. Isla families and tourists alike enjoy their evenings at the Plaza eating tacos and pastries from the vendors, joining a pick-up basketball game, celebrating Mass at the church and watching the world go by.

On the west side is the Palacio Municipal (City Hall). The Catholic church is on the south side with the basketball court nestled between the two. On the east side is a small playground for children.

From November through April on the 1st Thursday of every month, the Isla Mujeres Artist Fair takes place in the

square from 4:00 in the afternoon to around 9:00 in the evening. Local and visiting artists, food vendors and local non-profits share their talents with the residents & visitors of Isla Mujeres. You don't want to miss it!

The East and West Malecons 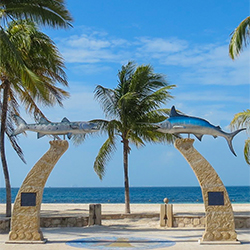 The Malecons are seaside promenades, lined with places sit, stroll, palm trees and sculptures. Vendors sell their wares and sometimes there are musicians or other entertainment.

Malecon West: The Rueda Medina Malecon which runs from just beyond the ferry docks all the way to Playa Norte, is a pleasant place to walk. You’ll see fishermen cleaning their early morning catch or leaning against a palm tree taking a break from mending their nets. Further along, the Malecon runs next to Playa Posada where you’ll see local families enjoying a picnic on the beach and volleyball games sharing space with colorful fishing boats.

Malecon East: Beginning at Playa Media Luna beach at the corner of Abasolo and Guerrero and running south all the way to the end of town is El Malecon. Originally built in 2003 this Malecon was badly damaged by Hurricane Ivan not long after its completion. Now restored, the Malecon is a lovely place to walk and if you are lucky you’ll see a family of dolphins swimming by! Parts of the wall have been painted with colorful murals and each of the small turrets has been dedicated to a different country with the word “Welcome” in different languages, a shout out to all the visitors to Isla! At the main entrance of the Malecon, across the road from the Plaza, you’ll see several statues and murals. The east Malecon is a wonderful place to watch the sunrise!

The last few years people have been finding their way onto the East Malecon on golf carts. Please DO NOT drive on the malecon in a golf cart or moto. It endangers the people as well as pets who are enjoying their stroll.

In the summer of 2014 a group of internationally acclaimed contemporary artists, including three Mexican artists, joined forces to raise awareness about whale shark conservation, ecotourism and long-term sustainability of natural resources by creating a series of large-scale ocean-themed murals on Isla. The project was led by PangeaSeed, an international organization based in Honolulu that is dedicated to protecting and preserving the world’s oceans through education, activism and art. 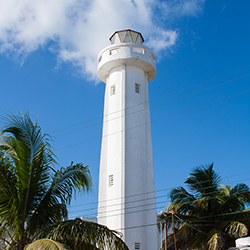 As you might expect, Isla has several lighthouses. Built by the Mexican Navy during World War II, the largest is known simply as El Faro (The Lighthouse). Located on Rueda Medina across from Posada Beach, it is 19 meters (62 feet) tall and flashes white twice every 10 seconds. The public is not allowed to climb to the top.

The smallest lighthouse, el Farito, is situated on a rock just at the entrance of the harbor. Only 5 meters (17 feet) tall with one white flash every 3 seconds. Snorkel trips to the reef surrounding the lighthouse are very popular.

The third lighthouse on Isla is at Punta Sur at the southern tip of the island. It is 10 meters (34 feet) tall with four white flashes ever 16 seconds. 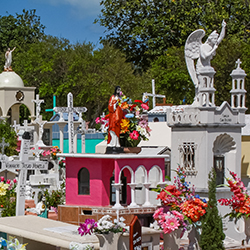 There is nothing more colorful than a Mexican cemetery with brightly painted statues and an array of plastic flowers decorating the graves. Though it is a bit strange to visit a cemetery while on vacation, a visit to Isla’s is a must. Some of the graves are in disrepair but most show signs of love and care as well as the wear and tear of the salt air.

Mundaca’s empty tomb (see Hacienda Mundaca) is about 6 meters to your right as you enter. Keep a sharp lookout as it sits low to the ground. Carved by his own hands with the skull and cross bones, in memory of his “pirating” days, it bears the words meant for his love La Triguena: "As you are, I was. As I am, you will be".

The cemetery’s caretaker welcomes visitors and doesn’t mind if you take pictures… just be respectful.

Scattered through the town are statues dedicated to the history of Mexico and the culture of the island. In 2010, the city of Isla Mujeres added sculptures of the Whale Shark at the entrance to Malecon East and the Blue Marlin and Barracuda on Malecon West.

Fisherman’s Monument (Rueda Medina & Mateos) dedicated to the families who make a living from the sea.

Goddess Ixchel (Guerrero & Abasolo) in Mayan times, Isla was a sanctuary dedicated to Ixchel. Find out more about Isla during the time of the Maya on the history page.

Sea Turtle Monument (Guerrero & Bravo overlooking the east Malacon) in honor of all the turtles born on Isla.

Benito Juárez (Juárez & Allende) One of Mexico’s most popular and only indigenous president.

Near Hacienda Mundaca, at the entrance to Sac Bajo road, there’s a statue dedicated to Ramon Bravo (1925 - 1998). Ramon was an oceanographer, researcher, environmentalist and colleague of Jacques Cousteau who called Isla his home. He is well known for his work for the preservation of marine life and for his outstanding research and discoveries about the behavior and habits of sharks. Find out more...

Next to the pergola at Punta Sur are Isla’s newest statues: the Goddess Ixchel and a very large Iguana. The Iguana statue is a fun photo op. Stand a few feet in front of it and raise your hand as though you are patting the iguana on the head. You’ll also see many real iguanas hanging out on the rocks nearby sunning themselves. Although they are friendly and well fed, don’t try to touch them - iguana’s are moody! 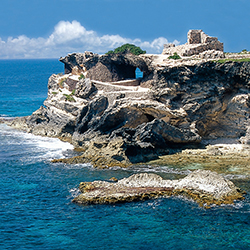 Punta Sur is located at the southern tip of Isla Mujeres, roughly 60 feet above sea level, where the rising sun first touches Mexican soil. Its rocky cliffs, the waves crashing on the shore and the multitude of blues of the Caribbean Sea make up some of the most spectacular scenery on the island. This is the highest elevation in the Yucatan and was home to an ancient temple honoring the Mayan Goddess Ixchel, rebuilt after it was partially destroyed in Hurricane Gilbert. Because it was built on high ground, archaeologists believe the temple was also used as a lighthouse to guide trade boats coming from Cozumel, Tulum and Xaman-ha (Playa del Carmen).

Ixchel is the Mayan Goddess of the Moon and the wife of the Sun, also considered a fertility goddess with great healing powers. For centuries, Mayan women came to Isla Mujeres on yearly pilgrimages to seek her help, and now Isla residents gather at Punta Sure very New Year morning to greet the first rays of the sun.

In 2001 the Sebastian Foundation sponsored the work of 23 artists from Mexico and around the world to create the Punta Sur Sculpture Garden. Famous sculptors such as Jose Luis Cuevas used modern shapes and bright colors to interpret the spirit of Isla Mujeres and the Mayan civilization. As you walk the path leading to the temple you’ll see small plaques with the name of each sculpture and artist. There is a small entrance fee to the Sculpture Garden and the temple.

Until the late 1990’s, the only other structure at Punta Sur other than the Maya temple was the lighthouse and home of the lighthouse keeper and his family. The station was established in 1899. The lighthouse is 34 feet

tall and flashes white four times every 16 seconds. The old lighthouse as well as the keeper’s house were rebuilt in the late 1990’s and are now part of the “Caribbean Village” with shops, a restaurant, and a gazebo where you can sit and relax and enjoy the view of Cancun across the water. 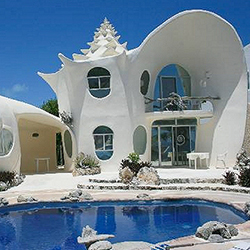 The Shell House, “Casa Caracol” in Spanish, is one of the most unique homes in the world! Designed by the architect Eduardo Ocampo for his brother Octavio Ocampo, one of Mexico's most respected artists. Built in 1997, the Shell House has been featured in magazines and television programs and has even been used as a back drop for fashion shoots. The little snail shell guest room was added a few years later.

The inside is as amazing as the outside, an artistic masterpiece with a round sunken living room and a bed shaped like a shell, of course! The bathroom and kitchenette fixtures are all made out of shells and bits of coral found on a nearby beach by Eduardo and Octavio. More shells decorate mirror frames, tables and even serve as curtain holders.

You are welcome to stand on the sidewalk and take pictures of this amazing home but please do not enter the property and disturb the occupants. When Octavio is not in residence, you can rent the house for a truly memorable experience.

The road along the east side of the island is beautiful with its rocky shoreline. There are areas where it looks like you can park your golf cart and enjoy the view but please park on the side of the road and not on the cliffs. Every year Isla loses parts of its shoreline because of erosion and the occasional hurricane. Parking on these cliffs is not only dangerous but harmful to the shoreline. Thank you for your consideration.

There is a new malacon located mid-island along the east-side Caribbean road that has an area for parking. Benches are scattered about so that you can sit and enjoy the wonderful view and refreshing breeze.

The west-side road has several beach clubs with a great view of Cancun across the bay. Most are open to the public and are fun places to stop and grab a bit to eat and a refreshing beverage.

Between the two main roads are residential neighborhoods (colonias), the streets lined with private homes and small shops. Worth a stop is the “bead ladies co-op”, a small shop just up the road to the east of Hacienda Mundaca. The ladies design, make, and sell beaded jewelry and crafts.

Scattered around the island you’ll see shell and craft vendors alongside the roadsides, calling you to stop and take a look by blowing into a large conch shell. The shells for sale make a wonderful memento of your visit and the handmade shell necklaces, bracelets, and earrings make perfect gifts.

During World War II, the Mexican Navy established a permanent base on Isla just at the edge of town. In 2005 the original tin-roofed buildings were demolished and replaced with the large modern structures you see today.

In the early mornings, they practice drilling on the north tip of their small airport. If you drive along the Caribbean side of the airport runway you can also see the remains of an exercise obstacle course. The Navy hospital located near the baseball fields and mid-island a residential complex for officers and their families.

The Mexican Navy is making a huge effort to keep Isla safe and secure so don’t be surprised to see them patrolling the streets and beaches around the island. Often several men are stationed at the ferry docks with their search dogs. Please be respectful and don’t try to pet the dogs, they’re on the job! 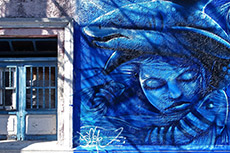 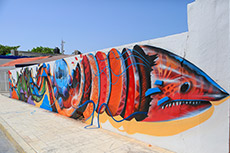 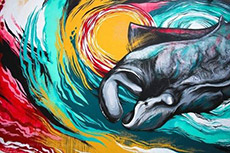 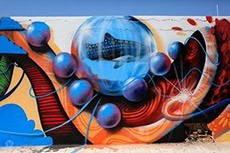