Time of the Maya

Isla’s history dates back over 1500 years when it was part of the Maya province, Ekab. The island served as the sanctuary for the goddess Ixchel, the Maya goddess of the moon, fertility, medicine and happiness. The Temple was located at the South point of the island and was also used as the lighthouse. The light from torches was shown through holes in the walls, which could be seen by the navigators at sea. The Maya also came to the island to harvest salt from the salt lagoons.

Recently the National Institute of History and Anthropology, announced the discovery of Mayan ruins and pieces of various materials in Mundaca Hacienda. There is evidence of five Mayan buildings, one of which could be the true temple of the goddess Ixchel and the south point ruin simply a lighthouse. The INAH also found and is holding over 100 pieces of obsidian, jade, and human skeletons and skulls.

Isla remained a sanctuary until it was discovered by Francisco Fernández de Córdoba in 1517. Legend has it that the only inhabitants of the island were the priestess of Ixchel and her court of women. Scattered around were numerous gold, silver and clay statues of Ixchel, and so the island got its name: Isla Mujeres, the Island of Women.

"During Lent of 1517 Francisco Hernandez de Cordova sailed from Cuba with three ships to procure slaves for the mines... (others say he sailed to discover new lands). He landed on the Isla de las Mujeres, to which he gave this name because the idols he found there, of the goddesses of the country, "Ixchel" and her daughters and daughter-in-law's "Ixchebeliax", "Ixhunie", "Ixhunieta", only vestured from the girdled down, and having the breast uncovered after the manner of the Indians. The building was of stone, such as to astonished them, and they found certain objects of gold which they took."
Excerpt from "Yucatan, Before and After the Conquest" written in 1566 by Friar Diego de Landa.

El Meco is not the original name for the site, that has been lost to time. El Meco was a nickname for a local resident who was bowlegged and for some odd reason, they named it after him. The site was a small, self-sufficient fishing village dating back to 300 AD (the early classical period 300-600 AD) it was later abandoned and then resettled in the late 10th century. The structures were built between the 13th and 16th century. The central plaza with the pyramid temple, know as El Castillo, was dedicated to the Mayan rain god Chaac. The pyramid was also a reference point for coastal navigation because the top can be seen from the water. El Meco was a major commercial port and religious center and also served as a port for Isla Mujeres (much like Puerto Juárez is today). The site was abandoned shortly after the Spanish arrived in the 16th century. 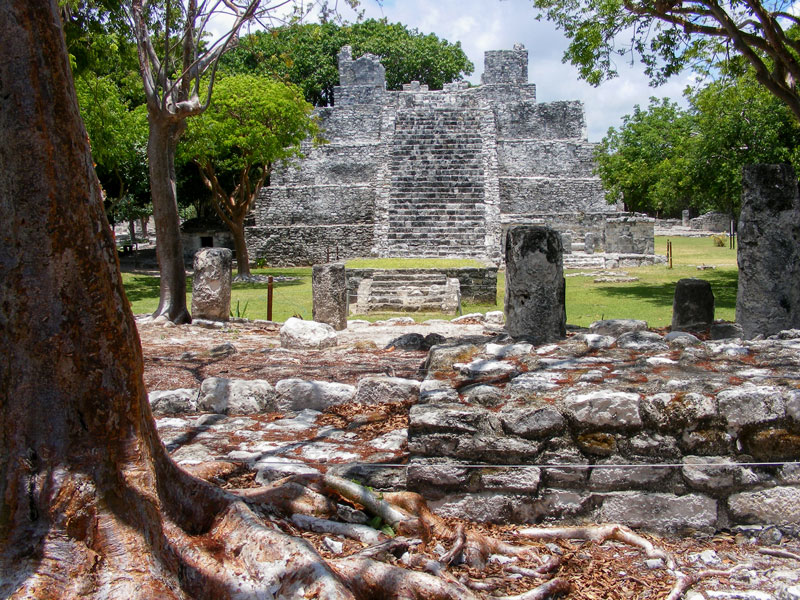 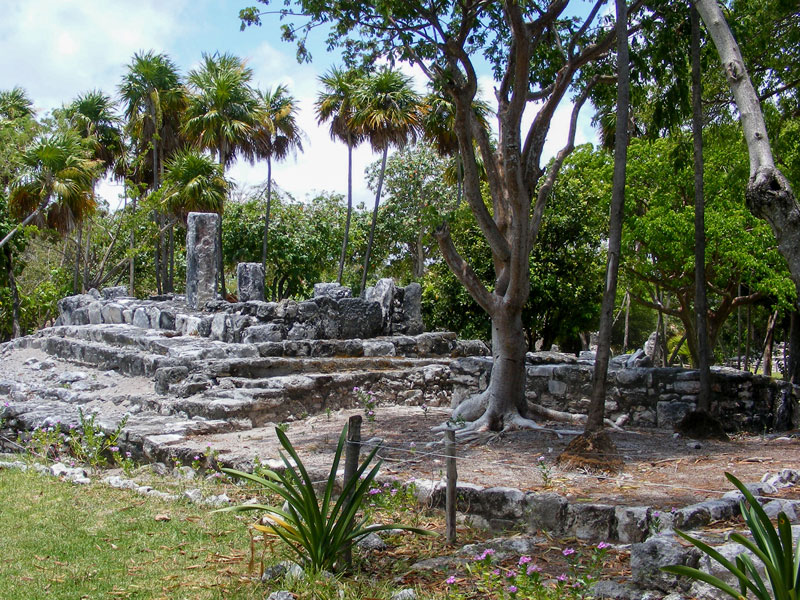 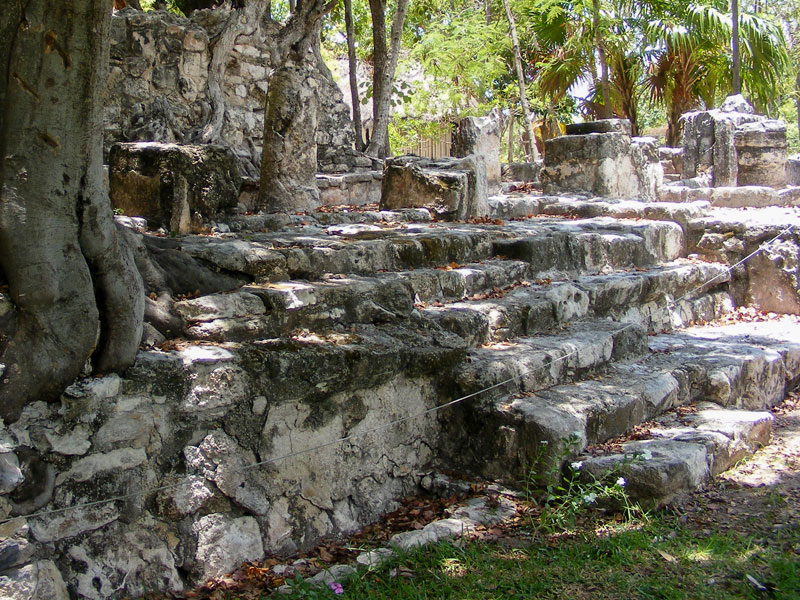 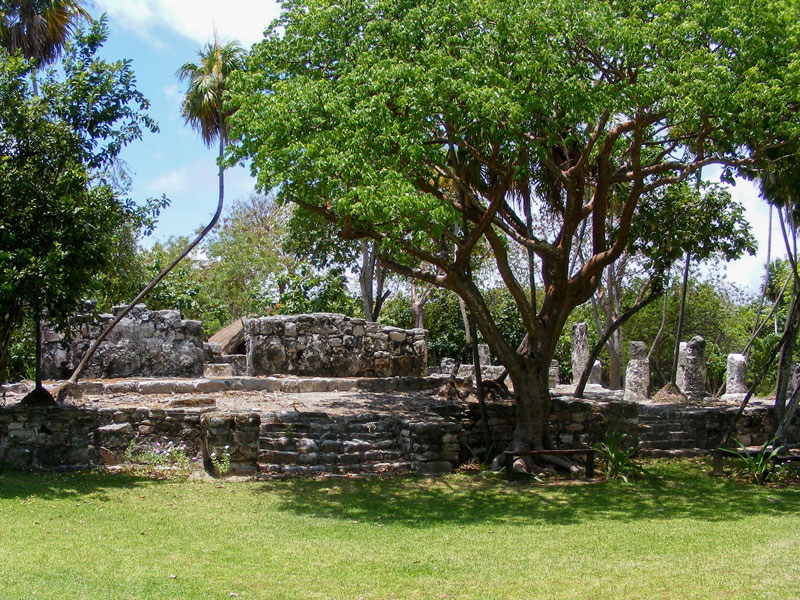 Isla’s strategic location plus the protective waters of the Lagoon Makax made a perfect refuge for pirates and buccaneers. It was from the Yucatan that the Spanish transported massive amounts of gold to Europe and the pirates took advantage of the opportunity to blunder the merchant ships. Legend has it that they kept their women here while they went out plundering, another reason Isla is called “The Island of Women”. Infamous pirates such as Henry Morgan and Jean Lafitte walked the shores of Isla.

Captain Jean Lafitte was rumored to have made Isla Mujeres his base towards the end of his life. There are many different accounts how, when and where Jean Lafitte died and where is body lies. Some say that he was killed by a Spanish warship out at sea, but his biographer, Jack C Ramsey, in his book “Jean Lafitte: Prince of Pirates”, wrote that Lafitte died on Isla Mujeres in 1826 from dengue fever.

The Sad Tale of Mundaca the Pirate

Fermin Anonio Mundaca y Marecheaga was born in October of the year 1825 in the village Bermeo of Santa Maria, Spain. After completing his studies he set out for the New World to make his fortune. He arrived on the shores of Isla in 1858 after acquiring his wealth selling captured Mayan slaves to Cuban plantations and some say pirating. Weather or not this is true, no one knows but Mundaca who cultivated and enjoyed his reputation as a pirate.

Mundaca immediately set out building a large hacienda he named "Vista Alegre" (Happy View) which eventually covered over 40% of the island. There were areas for livestock, birds, vegetables gardens, fruit orchards and exotic plants that were brought from all over the world. A special garden called "The Rose of the Winds" was constructed which served as a sundial telling the time of the day by its shadows.

1862 Martiniana (Prisca) Gomez Pantoja was born. She was one of five sisters and it is been said that she was a willowy woman with green eyes, white skin bronzed by the Caribbean sun and long, straight brown hair. Called "La Triguena" (the brunette), many men fell in love with her including Fermin Mundaca. He set out to win her, the arches above the gates were dedicated to her, naming them "The Entrance of the Triguena" and "The Pass of the Triguena" in hopes his wealth and power would win the local beauty 37 years younger then himself. His dedication was in vain, she married a man closer to her own age and as legend tells it, Fermin Mundaca slowly went insane and died, alone in Merida. His empty tomb still awaits him in the Isla Mujeres cemetery. Carved by his own hands are the skull and cross bones, in memory of his pirating days and the words meant for his love, 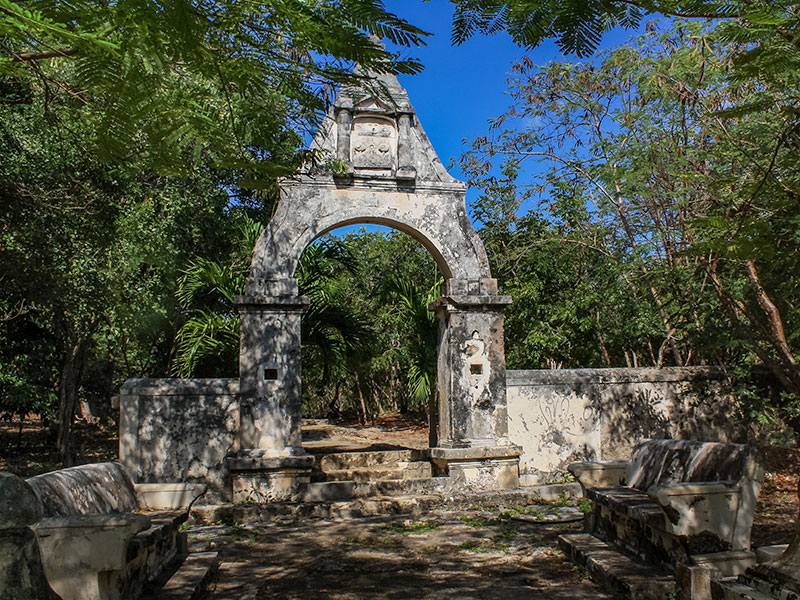 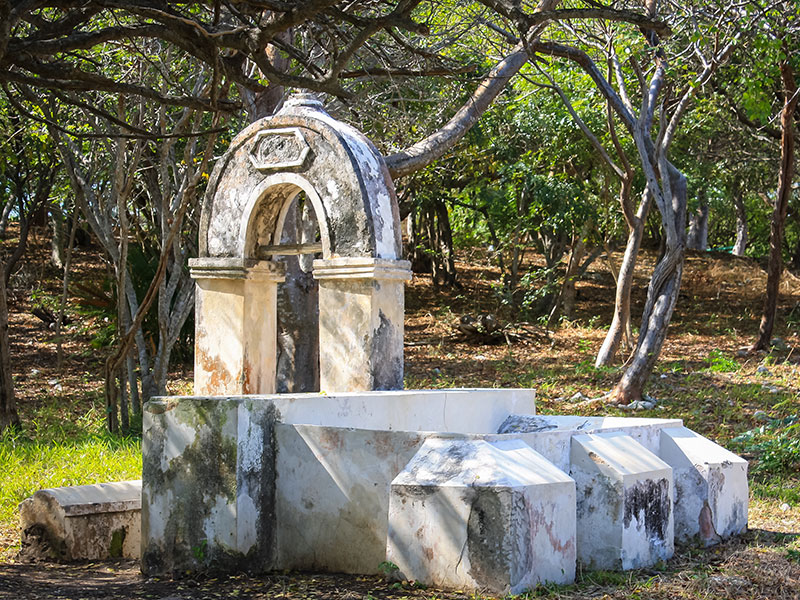 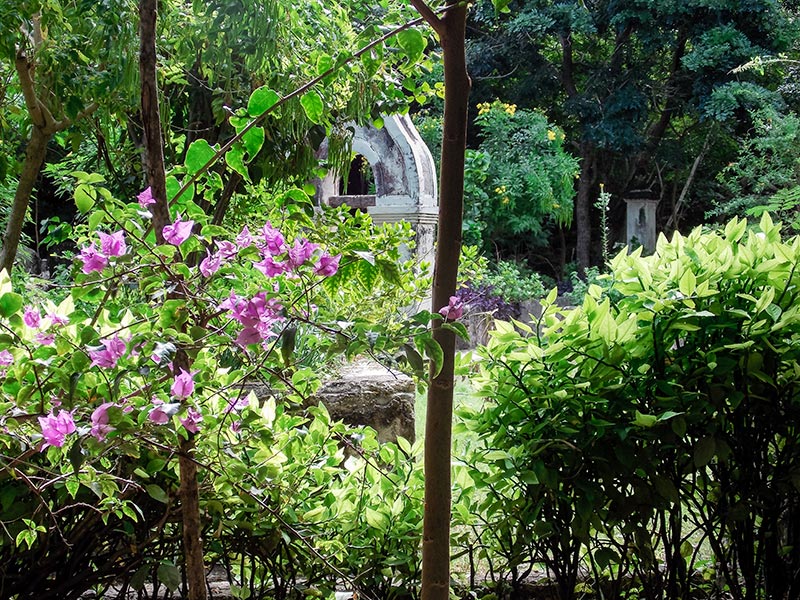 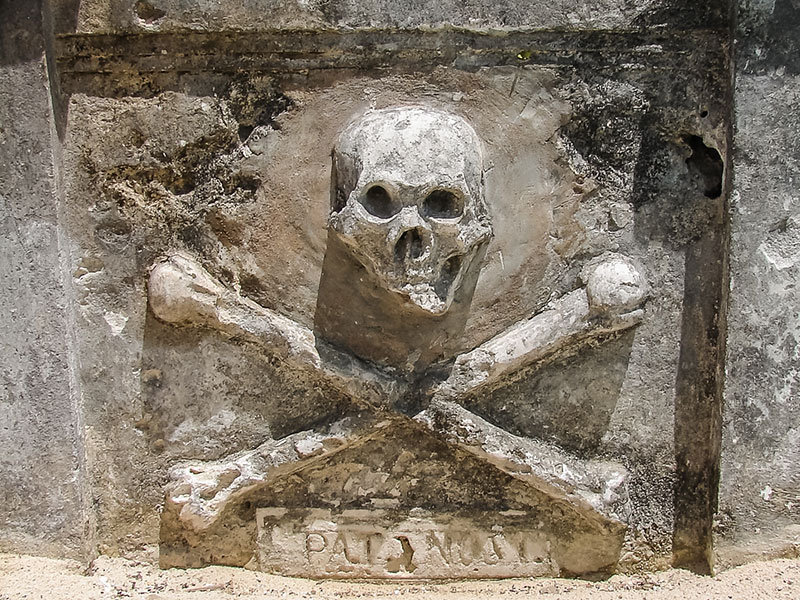 The Story of The Immaculate Conception by Enriqueta M. de Avila

More than 100 years ago in 1890 in the ancient colonial settlement of Ecab (Boca Iglesia) at the northern tip of Quintana Roo, several fishermen (one, my father-in-law, Christiano Avila Celis), discovered three "sister" statues of the Virgin. They were carved out of wood with their hands and face made out of porcelain. And so it was said, each one of the fishermen believing so strongly in the Catholic religion carried a Virgin to his own village. It was also said that the Spaniards had brought the "sisters" to Ecab many years before in about 1770.

On Isla Mujeres the Virgin's first shrine was a small palm and wood Chapel and at a later date moving "Her" to the place that "She" presently occupies in the church was not easy. More than eight men could scarcely lift her…upon finally moving "Her", the small palm chapel burned down completely to the astonishment of all those present. It is said that the Virgin walks on the water around the island from dusk to dawn looking for her "sisters". Some years ago an Islanders saw the Virgin walking on the sea early in the morning. Later that morning her dress was found to be contained burrs and sand.

At Izamal, Yucatan and Kantunilkin, Quintana Roo where the other statues are, the feast is celebrated with mass from August 6th to the 15th and from the 30th of November to the 8th of December as on Isla Mujeres.

The "bajada" (descent) of the virgin is an unequaled event. More than 3000 faithful gathered together in the main square year after year to inaugurate a series of festivities that begin with the procession of the virgin and climax on December eighth with the grand fiesta in which all the inhabitants of the island and visitors participate.

Leading up to Today

After Mexico gained independence in 1821, a small village began in what is now Centro. During the War of Castes (1847 - 1901), many Mayans took refuge on Isla and the village slowly grew. In 1850, it was named Pueblo de Dolores.

In the 1950’s, long before Cancun was even a glint in developer's eyes, Isla Mujeres opened her arms to visitors. There was no ferry service so tourists would signal by flashing car lights from a make-shift dock near where Puerto Juárez stands today. The sons of local fisherman would take small boats over to the mainland and pick up them to bring them to the island.

Since Isla is the easternmost point of Mexico, the Mexican Navy established a permanent base during World War ll. In 1970 the development of Cancun began and as Cancun grew, so did Isla. The sand streets were paved, filtered water was piped in and phone service was established. Tourism flourished during the later half of the 20th century, partly due to the island’s most beloved resident, Ramón Bravo (1927-1998). A diver, cinematographer, ecologist, and colleague of Jacques Cousteau. He is well known for his work for the preservation of marine life and for his outstanding research and discoveries about the behavior and habits of sharks.

In 1969, an eighteen year old local fisherman, Carlos Garcia Castilla known locally as “Valvula”, was diving for lobsters when he found a cave where the sharks entered, but did not come out. Curiosity led him to free dive about 65 feet and he found that the sharks seemed to be sleeping. Until his discovery it was thought that sharks never slept, that if they stopped moving they would die.

He later told Ramon about the cave and together with the National Geographic Society, they investigated this phenomenon. Jacques Cousteau soon arrived on the Calypso and Isla Mujeres became famous with marine biologists and divers around the world. Although named “cave of the sleeping sharks”, whether the sharks actually sleep in the cave is uncertain. Ramon once said that the eyes of the sharks followed him intently as he moved about inside the cave, suggesting that the sharks are not truly asleep.

His ashes rest in the Cave of the Sleeping Sharks, under a bronze plaque that reads:


Bravo Ramon Prieto, protector of the sea and ocean, always sleeps next to his shark in this cave
28/02/1998 Isla Mujeres

The people of Isla Mujeres are proud of their history and hold in their hearts the magic of their island and the promising future. Not even Hurricane Gilbert in 1988 nor Hurricane Wilma in 2005, the two most powerful Atlantic hurricanes ever recorded, could keep Isla from welcoming visitors from around the world. 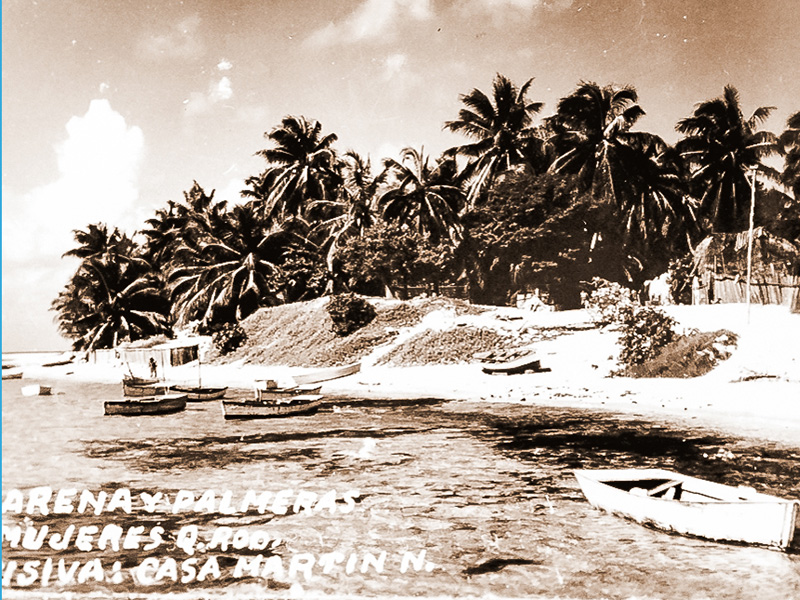 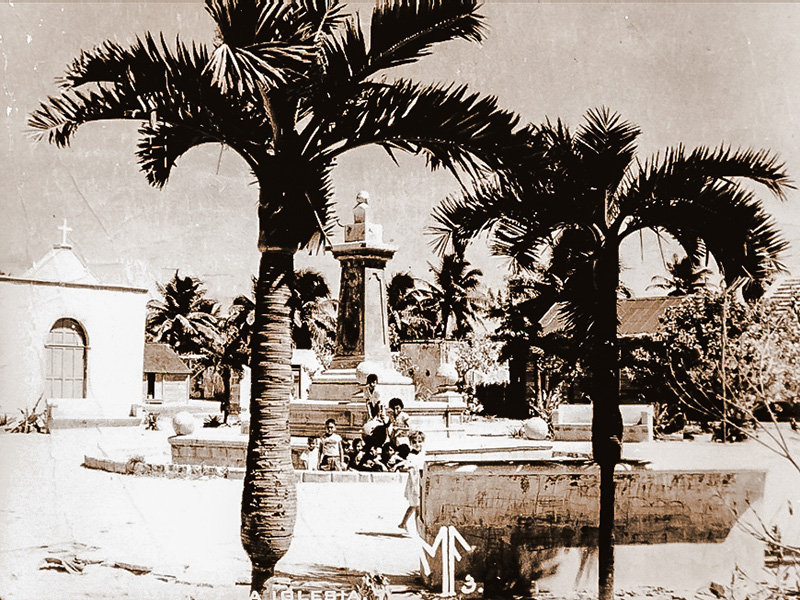 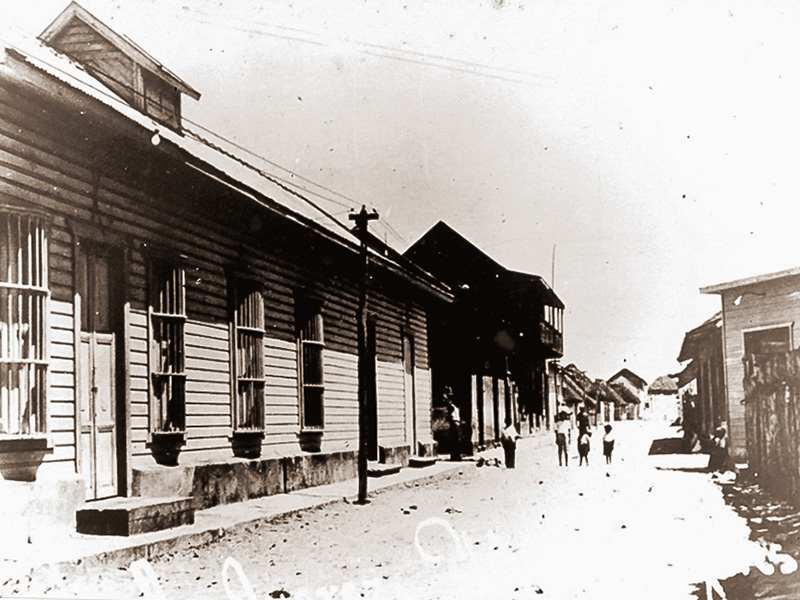